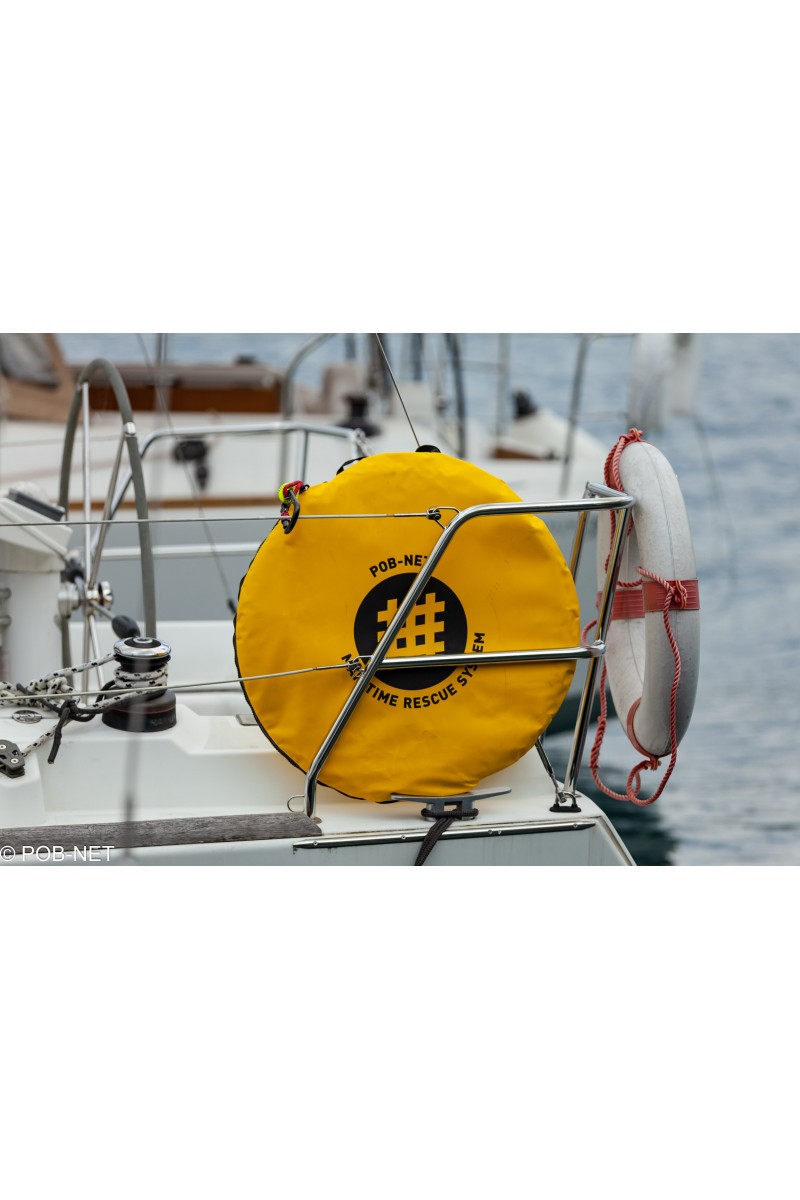 With the aim of this rescue system people and objects can be saved easily and fast out of the water within three steps: Capturing, Securing, Rescuing. Practical experiences show that the utilisation of conventional person-over-board (POB) rescue systems entails some risks for the person, who has to be rescued. In case, the person-over-board could not reach and get into the rescue system on his own, he or she is exposed to the risk of a life-threatening hypothermia caused by a time-consuming rescuing process.The patented rescue system POB-NET is a mobile, easily transportable and stowable system, which is ready for use without great technical effort and time. The rescue system consists of one self- expandable, tubelike net, with which a person or object can be saved out of the water within three steps: Capturing, Securing, Rescuing.The person-over-board can be captured by slipping the tubelike system over the person’s head. Afterwards, the POB can be secured by pulling up the tunnel (by means of ropes fastened to the tunnel), which brings it into a horizontal position. By doing so the POB will be enclosed by the net and, thus, secured. The further rescue process occurs by pulling up the tunnel through physical strength or by using existing boat equipment, e.g. the spinnaker halyard or the boom. The rescue system will be delivered with a storage bag, on which the individual application steps are listed. In addition, a QR code is printed on this storage bag, which leads you directly to a video presentation of all application steps.

On the weekend of Whitsun, two older couples sail in the Adriatic. A beautiful wind blows and the sea has built a wave of half a meter – a perfect sailing trip with a magnificent atmosphere. When the yacht owner and helmsman sends a crewmember onto the foredeck to clear a trapped leash, it happens: The man loses his balance due to the waves, cannot hold on to the boat and goes overboard. He falls into the cold water, which at this time has only 14°C. Fortunately, he wears an automatic lifejacket, which instantly opens in the water and thanks to its signal colour, he can be seen well in the water. The boat can be directed towards the man who went overboard by immediately initiating a rescue manoeuvre. He has to be rescued before getting a life-threatening hypothermia. But how can that be managed?

The sailing yacht has a side wall of over one meter in height and after being in the water for a while, it is nearly impossible for the floating man to climb up the freeboard on his own. The limited mobility due to age is not the reason for this inability. Very athletic people would have a problem in such a situation as well. Even if such an accident occurs at the rear side of the boat, it would be difficult and very dangerous to climb up the boat because the swaying boot could hurt the person who went overboard.

So it is not easy to pull a person out of the water, without risking an injury or endangering another crewmember, who gets into the water for assistance. In such a situation a rescue system is needed. The systems, which are currently available on the market, are often very difficult to handle. Furthermore, there is the risk that the person to be rescued may be injured (e.g. the risk of fractured ribs when using a rescue loop) or that the assistance of the person, who went overboard, is required (i.e. excluding unconscious).

In addition, it is highly likely that the person in the water get cold very quickly due to low water temperatures. Therefore, the person has to be rescued in a lying position to avoid a rescue death by threatening cardiac arrhythmia, which occur in hypothermia.

In this example, there will be a happy end because the boat is equipped with the POB-NET, which is used for rescuing the person, who went overboard. The floating or even unconscious person can be caught within a second, secured in a lying position and afterwards be lifted onto the boat. All these steps can be carried out by the man’s wife. Thus, no physical strength is required because boot equipment can be used.